It implies the ability to become aware not only of our cultural values, beliefs and perceptions, but also those of other cultures. Cultural awareness becomes essential when people of different cultures communicate. As people see, interpret and evaluate things in different ways, what is considered appropriate in one culture is probably inappropriate in another, and therefore misunderstandings arise. Communicating with others is difficult; it demands sensitivity and creativity.

In spite of many similarities, people have differences in the way they do things. It requires to understand and reconcile these differences to function effectively in a group.

The interaction with a person or object from a different culture, set in a specific space and time, which provokes negative or positive cognitive and affective reactions, a sensation of loss of reference points, a negative representation of oneself and feeling of lack of approval that can give rise to uneasiness and anger.

Mostly negative reactions can be variations of:

Beyond emotional and cognitive reactions, behavioural response also occur, such as:

Method of critical incidents consists of using the experiences of culture shock to shed light on our reference frame and identify sensitive zones.

How to get there?

2. Understanding the reference frame of the other

DEVELOPMENTAL MODEL OF INTERCULTURAL SENSITIVITY elaborated by Dr. Milton Bennett indicates reactions that people have to cultural differences. These reactions belonging to six stages and range from ethnocentrism to ethnorelativism:

Intercultural competence is the ability to function effectively across cultures, to think and act appropriately, and to communicate and work with people from different cultural backgrounds – at home or abroad. 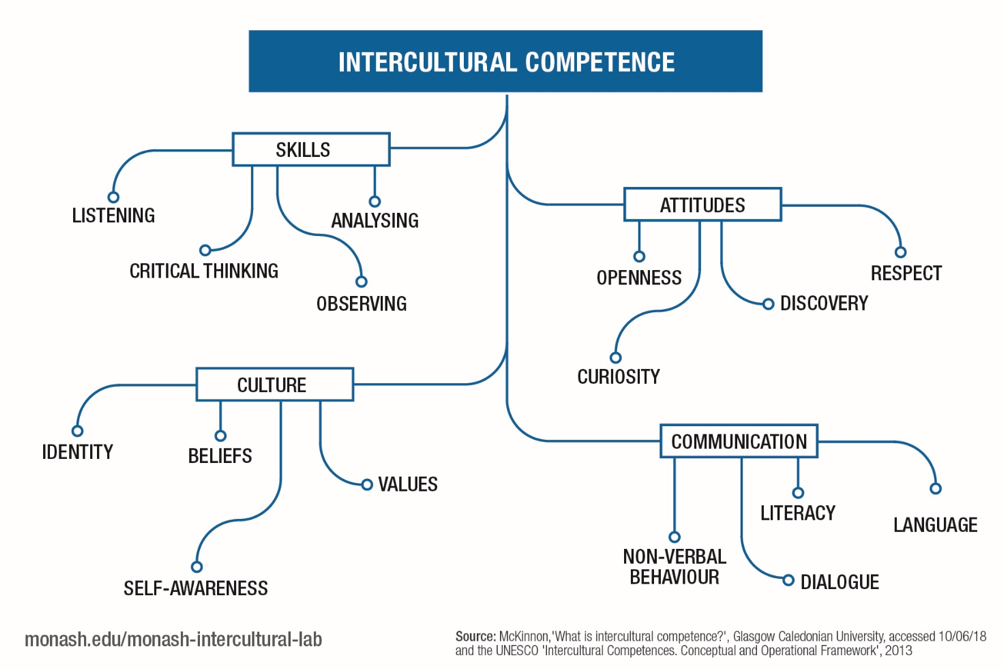 The components of intercultural competence are knowledge, skills and attitudes, complemented by the values one holds because of one’s belonging to a number of social groups. These values are part of one’s social identities.

Intercultural attitudes: curiosity and openness, readiness to suspend disbelief about other cultures and belief about one’s own This means a willingness to relativize one’s own values, beliefs and behaviours, not to assume that they are the only possible and naturally correct ones, and to be able to see how they might look from an outsider’s perspective who has a different set of values, beliefs and behaviours. This can be called the ability to ‘decentre’.

Skills such as observation, listening, evaluating are necessary to identify and minimize ethnocentrism, as well as to seek out cultural clues and meaning. Analysing, interpreting, and relating are needed in order to compare and seek out linkages. Critical thinking is also crucial – viewing and interpreting the world from other cultures’ point of view and identifying one’s own.

In regard to knowledge necessary for intercultural competence, for example the following are needed: cultural self-awareness (meaning the ways in which one’s culture has influenced identity and worldview), culture-specific deep cultural knowledge, including understanding other world views, and sociolinguistic awareness.