On the 07th of November 2019, Croatian team has held a meeting of the WELCOMM Community of Practice in Sisak – the city that has been receiving resettled refugees since May 2019. Sisak is the city that has experienced war in the ’90s in Croatia and still experiences effects of that time. But at the same time, it is the city where the local Muslim community and Bosniak National Minority Council are very active in the local community social, cultural and political life (charity organization Merhamet, Bosnian department in the City library, etc.).

In the Croatian context, where there are only around 800 people being granted refugee status, there aren’t many local communities having the experience of receiving refugees and including them into community life. So far, only the city of Kutina and the city of Zagreb gained that experience – because the only two reception centres for asylum seekers are located there. However, since 2018 the state is planning to arrange decentralized relocation of refugees around Croatia – in different cities where there are state-owned apartments. After Zagreb, the city of Sisak and the city of Karlovac have the most state-owned apartments where refugees are already placed or will be placed in the upcoming period. What lack in this process is the communication of state institutions about this towards local institutions and local organisations – who could support refugees in their everyday lives. In a way, what is happening – is ad hoc location of people, what leaves everybody to deal with the new situation how they know. This is a clear sign of how integration policy in Croatia is being implemented – unplanned, uncoordinated and uninformed.

This is the reason that motivated us to dislocate our COP meetings from Zagreb into the new reception community – where we could offer support and knowledge sharing. RCT Zagreb and CPS invited organizations and individuals from Zagreb to meet interested stakeholders from Sisak, and discuss the current situation. 20 people attended this meeting: representatives of Employment service in Sisak, Centre for Social Care in Sisak, City of Sisak, Public Library in Sisak, local civil society organisations from Sisak, organisations of migrants working in the field of integration (Living Atelier, Afrobadinya). The meeting took place in the local library, in the part of the city where most of the resettled refugees are placed.

We have discussed current difficulties in the integration process of people being resettled or granted international protection through the standard procedure. Main fields of discussion were: language courses, education, employment possibilities, connection with the local communities.

Civil society organizations in Zagreb have presented a non-formal network of organizations that was established in 2011 and is working on integration aspects. There was a suggestion that the coordination widens to include organizational and individual members from Sisak as well, what was accepted on the side of Sisak representatives. Further on discussion was focused on how to directly contact refugees and support them without the knowledge of the language. “Living Atelier” representative shared her experience and approach – that is very much focused on causal human touch that evolves every time a new contact and communication is established: which not only supports people but also encourages them to learn the language of the „other“ (either Croatian or Arabic).

The conversation with local stakeholders was very fruitful and, although many challenges and concerns are raised, optimism and willingness to contribute to successful and sustainable integration prevailed. All present stakeholders readily accepted to partake in the Community of Practice. As a first step in bringing the local community their new neighbours – resettled refugees, together and facilitate interaction, Community of Practice will initiate and organize a meet-and-greet event in December, in hope that this will become a local practice. WELCOMM will continue to support and facilitate cooperation of local stakeholders and their collaboration with national and international stakeholders as to achieve meaningful and sustainable inclusion of refugees and migrants. 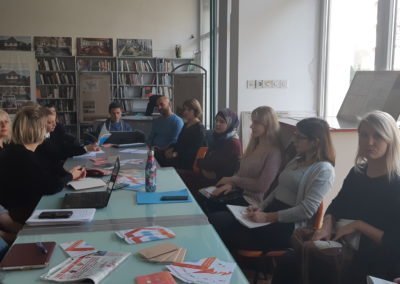 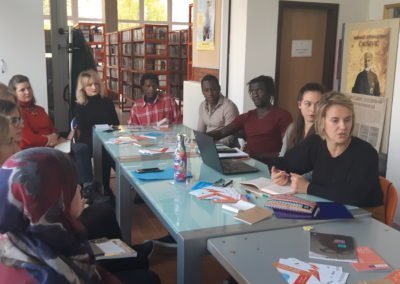