Ljubljana, 23 September 2019- What are the challenges for a successful integration of migrants and refugees in Europe? What is required to facilitate a smooth reintegration process of these new citizens?

In the framework of Welcomm project, an EU project funded through the Asylum, Migration and Integration Fund (AMIF), a roundtable took place at the premises of the Slovenian Philanthropy Institute in Ljubljana, Slovenia on 23 September 2019. In the presence of the representatives of the partnering organizations from Austria, Italy, Croatia and Slovenia, and members of the local community, experts and activists in integration and human rights discussed the concept of migration and integration in today’s Europe and described challenges and opportunities they are facing in their everyday work. 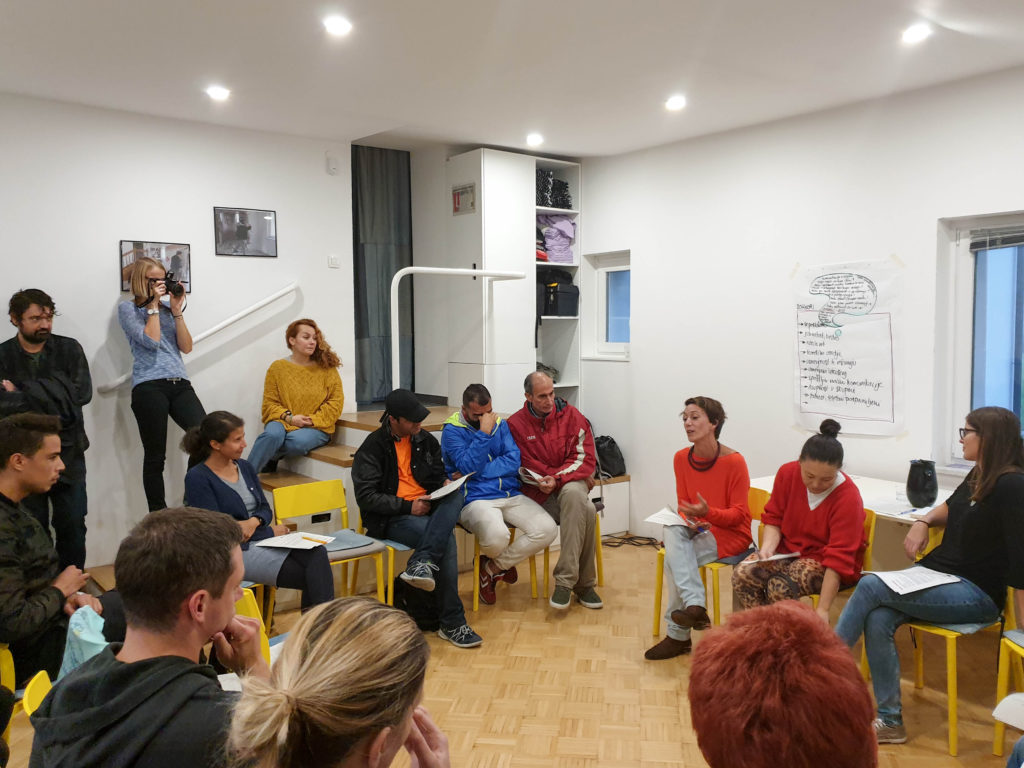 The experts outlined the main challenges facing the new member of the community in terms of integration, starting from the use of terms such as refugee or migrant, which tend to reduce the role of the newcomers and ignoring different roles they play in the society, hence, distancing them from the rest of the community. Language barrier and lack of access to employment opportunities and financial services were also mentioned as the most important factors impeding integration.

Aigul Hakimova, the representative of Gmajna Cultural Association, which implements projects in the field of integration in the labor market, emphasized the importance of understanding the history and its impact on each country’s migration policy. In her opinion, having gone through socialism, the Balkan war and now having become a member of the EU, Slovenia is yet to develop its own migration policy. She described the work her NGO is doing in tackling the challenges the newcomers are facing in accessing the job market in Slovenia through establishing cooperatives that provide them with employment.

Cyrille Cartier from Croatia who works in the Živi Atelje DK, described her experience in establishing a women-run cooperative and an independent, interdisciplinary, non-governmental and non-profit organization focused on support and cooperation with artists, inclusion of the public through and into art locally and internationally. , She outlined their approach in supporting the “women newcomers in Zagreb” to become part of their new community through participating in art projects, join-cooking sessions and sport activities. In her words “Successful integration requires a trustful environment and the newcomers should be met at eye level and treated as equal partners.”

Roberta Lo Bianco from CESIE based in Palermo, which historically has been a port of arrival for various nationalities, stressed that the presence of people with a migration background is shaping a new society that require the development of intercultural competences by everyone involved, the newcomers as well as the receiving communities.

Integration is not a one-way street, but a process of mutual rapprochement that Includes exchanges but also misunderstandings, conflicts and requires all parties to remain within the process, trying to listen to each other, communicate based on their own cultural references to define new intercultural society. As a successful example of such an experience, she introduced Moltivolti, a successful social enterprise established by an international group of individuals which is frequented by tourists and locals and contains a restaurant with a Sicilian-ethnic and popular cuisine and a co-working space dedicated to the non-profits working on different social issues.

In the discussion with the audience, many of them from the refugee and migrant community in Slovenia, some important conclusions emerged.  The participants pointed out that there are different communications tools that can help reduce the distance and find a common “language”, such as sports and artistic projects; however they agreed that knowing the local language is the most powerful tool to truly participate in the community of arrival. Integration remains a very broad concept in the view of different stakeholders; however, it is often reduced to mere service provision. The panelists and the audience of the round table reiterated that it should be perceived more broadly and as a continuous process with the aim to abolish power imbalance and to create various spaces for people of different backgrounds to come together and work towards more inclusive communities.